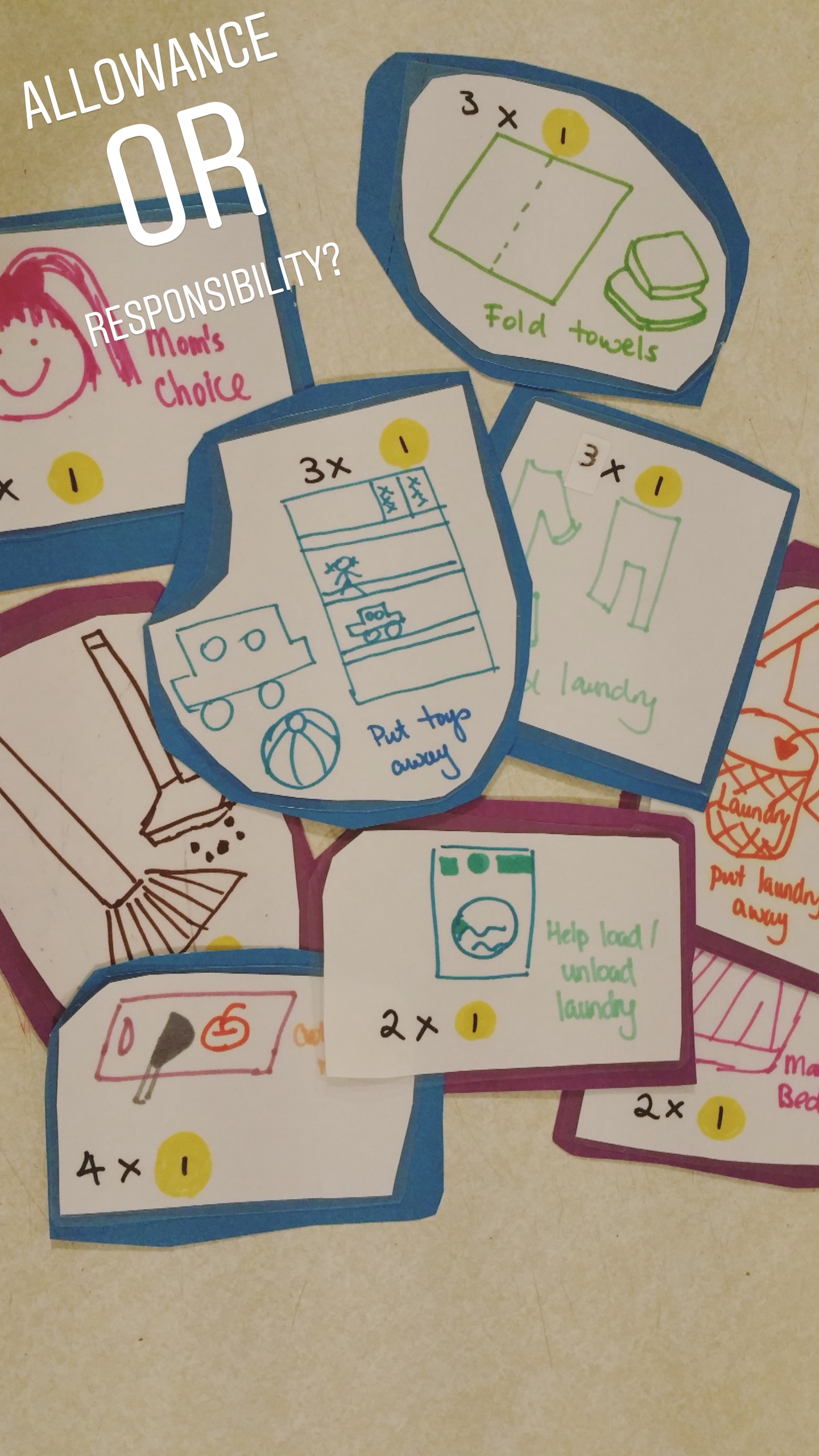 So when my current 4 years old was 2, we decided to start to develop her “economic” sense, so I made all these pictures and “coins” chart.

You picked one of the chores and then you did it and you would earn the numbers of “coins” according to the task, then after collecting certain number of “coins”, then we could go to a store and you could “buy” toys you wanted (within the dollar amount of “coins” you earned, e.g. 20 or 30 coins = $1, something like that). We ended up I think we only bought 2 items because she actually rather to do the chores and earned the “coins” and then she left the coins on the chart and she would rather be like that and we left the chores and charts on the fridge all the time.

However, the past week, she suddenly decided that she really wanted to be a BIG sister, even though she already is a big sister to her little brother. But she wanted to take up the role to be the one who really takes care of baby or little ones, i.e. want to act like a mother? She has been dressing up Mr 2.5 in the morning for awhile now and now she wanted to change his diaper, played with him in HIS terms, goes after him wherever he goes….etcetc and she suddenly “grow up” so much she would do dishes, do laundry, cooking, fold and put away all their laundries by herself, without asking to earn coins. (Hubby said that may be Ms 4.5 wanna be a mom or like her mom, which really touches my heart)

I was in a debate, I grew up without earning coins by doing chores, except when I was in UK, where I witnessed how my guardian working with her grandchildren that way. I do agree that it is a good way for kids to understand you can have money when you work hard for it and earn it, however, on the other side of me, I believe that chores should be done no matter what and should be done out of their responsibilities.

I do not want to raise kids that they have never done their laundries before or don’t know how to cook. These are life skills that I wanna them to learn and that’s why I decide to homeschool them.

So I think I can put these cards away and to teach them economics, I would give them a grocery list and money and they can learn from there and for now, she is out of that stage, she could learn to do that when she is 14 or 15 and will learn when working part time.

I am pleased, proud and happy that she would do her chores because of responsibilities (plus she always love to do it when she was 1.5). It shows different that she first did it, because she loved to be involved and then she did it to understand you need to work hard in order to earn coins and get what you want and now she did it because it is her responsibility to look after her own toys/laundry/her stuff or to understand her role as a sister even deeper than her age should understand.

So do you give allowances to your children when they do chores or not?